Sammy Miller came out here and did demo rides on Bultacos around 1970/71 and Mick Andrews came out here and showed off the TYs in 74 and 75. Maybe Mick did come and do demos on OSSA MARs but I don't remember it.
As far as I know, the first and second MAR model production bikes were only ever sold as green/white/silver.
There's been claims for a while of an OSSA MAR in Australia that is orange and that the paint scheme was original. I'm ready to be convinced but I've yet to see anything that would make me believe the claims.
If you think about it, why would OSSA paint demo bikes different colours to the production bike?
There are OSSA trials bikes that are orange but they are much later (1980) and are not called MAR.
I'd love to see photos of this bike that's for sale

My memory could easily be wrong, and I can't find it on the internet yet, but I have an idea somewhere in the back of my mind that I saw pictures a long long time ago of Mick Andrews on an orange looking OSSA in the SSDT in about 1970 (pre-dating the MARs).

At this stage I'm reluctant to say that it didn't happen, but if he did do demos in Australia on OSSAs it would have to have been very early in the seventies, but I don't recall anything like that.

I am pretty sure the early Ossa trials bikes were red with a white diagonal stripe, that is before the white and green MAR's. However I have never seen one in the flesh.

Found this pics.
and this.
https://www.youtube.com/watch?v=pnJt8vA4AaM&app=desktop 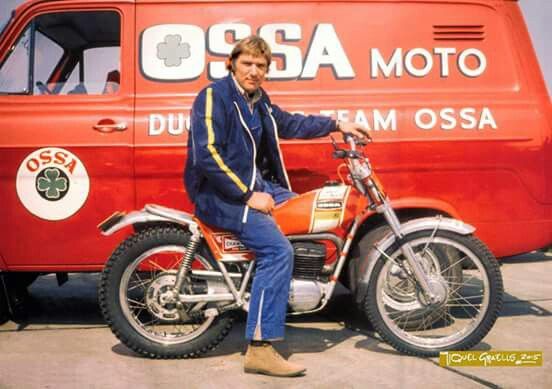 An important thing about those lovely orange

s is that they are not MARs, they are MAs

Could it be an MAR with the later 350 paintjob?

(Scroll down the page)

Thanks for the replies,im thinking this bike is a MAR with a different paint job,how do l post photos in forum? Steve