Got a technical question? Ask it in here.

All this talk about modifying.
If the bing was fitted back then surely it must be good enough now.
Changing things isn’t always for the better.
Cheers
Brt650

Ahh pure as the driven snow you are BRT :-J

Thanks all for your input, I've got enough info now to work out what I need. The old beautie arrived yesterday after a 2 week trip from SA, all very original right down to the Bultaco stamped bolts everywhere, obviously the carb was my concern with returning it to original specs. Cheers.
PS: I have already slipped on some gas girlings that I've had for years that still work fine. 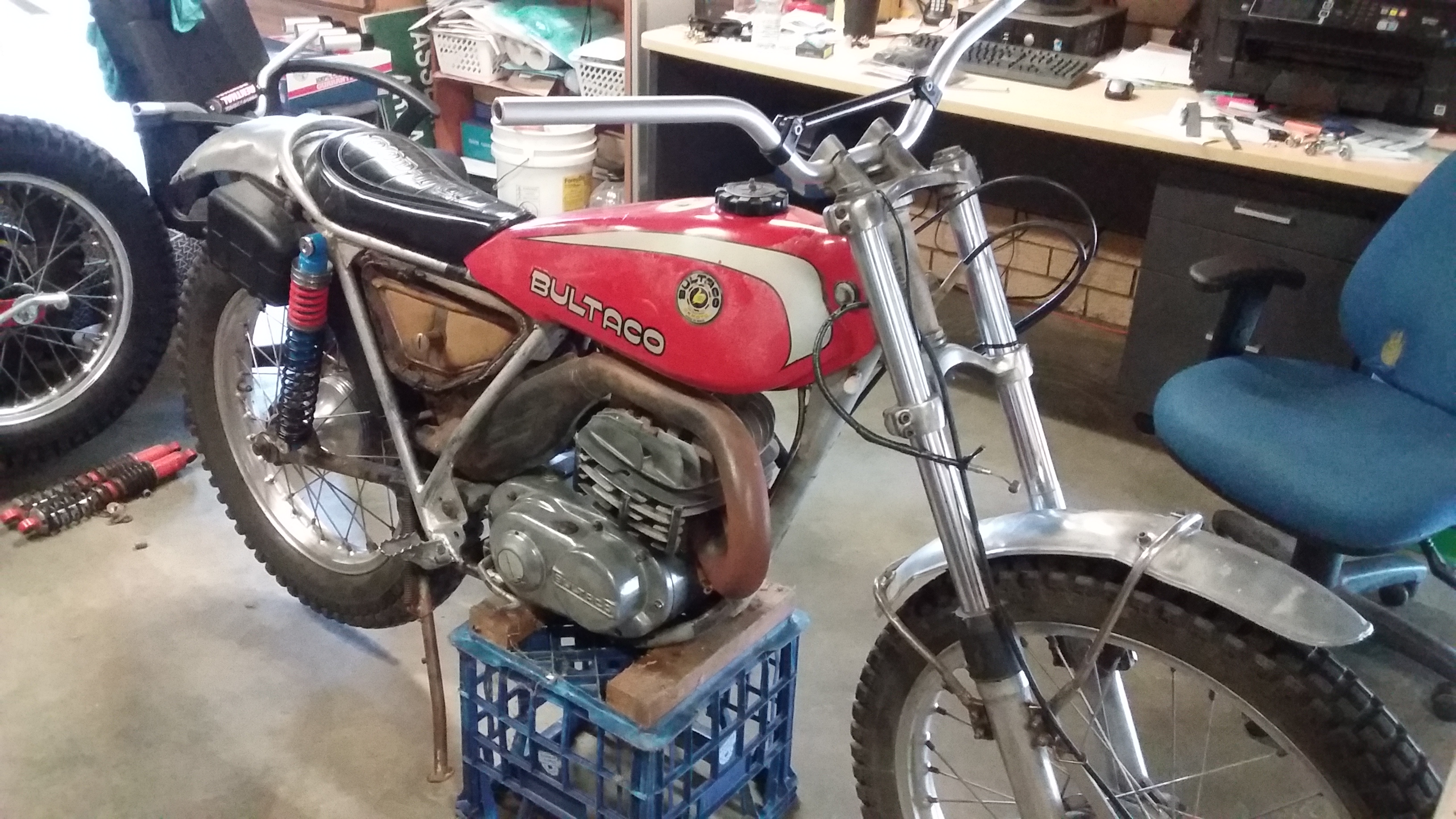 That Sherpa looks good Rod. A great trick for your milkcrate that works really well for a Sherpa T is to put the milkcrate on a 20 litre drum and you will have a stand that you can spin the bike on. Yep you can do 360`s in your garage. It does work really well. Nice to see you have a real trials bike now!

Thanks Graham, a Bultaco is a thing of beauty with maybe a wonderful engine and good forks for its time, but that's where it ends for me unfortunately. I find it a long, lump of a machine with a spindly swingarm as mine is bent upwards on the left side just forward of the brake stay fixing point, which probably explains the inclusion of gussets on top of the blue 198/199 A swingarms I expect. I intend to have it straightened but would like to find an alternative to use when and if I actually use it for some twin shock competition, does anyone know of someone that makes aftermarket swingarms for the Sherpa T, or does the 198/199 A swingarm maybe fit my model 183. Cheers.

Hi Rod. I just answered you on TC so have a look. The M199s are even worse for bendy swing arms. Graham.

Cheers Graham, I've responded over on TC. The swinging arms on these old bikes is not much bigger than the 25mm steel electrical conduit I worked with during my apprenticeship, hopefully they are thicker walled. Some things that I have noticed now that I have a '76 Sherpa, '74 Cota, '74 MAR all sitting along side each other is the differences in their frame geometry and tubing diameters and the awful weld quality on all of them.
The Ossa by far has the strongest looking frame and swinging arm with larger overall diameters and has the integral alloy bash plate protecting the full width of the engine, but then they fit spaghetti like 12 mm axles to front and rear wheels and a chain tensioner that pivots off the same arm as the rear brake lever, there's no rime or reason to what those crazy but lovable Spaniards did back in those days. I've read that it wasn't uncommon for the workers to be drinking vino at smoko, wish I could have a XXXX at work sometimes. I think some of those engineers and designers indulged in too much of that Vino also, just my opinion.

Users browsing this forum: No registered users and 0 guests