Always good to see all sorts. Though somehow I prefer looking at the 'before' bikes... they all look different, whereas restored ones all look the same.
Or maybe it's the tempting look of a potential restoration project.

I've been wondering why Gregs name has turned gold. This one looks a lot more realistic so started with checking how much clutch pushrod travel I was getting. The mechanism is a multi-start worm or "bendix" that was phased out on

in about 1969 but was continued to be used by other manufacturers (Suzuki, Yamaha etc) for a while longer until the Japanese caught up with

design advances (that bit was especially for Graham Weiss).
There was a bit of play in the bendix on the bike so I thought I'd take it apart and have a good look at it.
Here's what a bendix looks like. The one in the photo is actually a less-worn bendix than the one that came out and it was nice and clean so got used for the photo. .
The clutch cable goes on an arm that twists the male part of the bendix and it sits in the engine cover like this. Yes that's why later they fitted those lovely little rotary roller thrust bearings, (I'm sure there's a technical name for them... anyway...)

That is interesting David. I haven`t had much to do with the early Bultaco engines. I have worked on a few but not to that much detail as yet. Don`t forget they had a 125 roadracer which came out in 1966 with water cooling, 6 speed gearbox and a CDI ignition so they were not behind the times bu any means. 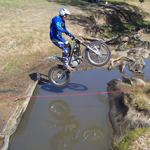 Hi Everyone,
David, it looks like there is 3 possibilities for fitting that bendix, it might pay to try all 3 as sometimes the machining is a little out. One position might have less drag/friction than the other 2?

That is a cosiderable challenge you have set there Kurt with your cryptic golden post! For the record, just one head gives me enough problems!

Eagle, do you mean you want photos from after I fix them? What I was asking is what do you get when you add them together? Here is some more photos of the 200 because I know you are a Just for the record, I am with you Rod:
GOLDMEMBER